Mike Tyson – the ultimate boxing legend, heavy weight champion and Hollywood Celebrity, was in Dubai to launch the Mike Tyson Academy. Part of the launch events also included a gala dinner for which he wanted a Bespoke Tuxedo that would be a perfect fit for his powerful personality and he chose to wear a Tuxedo crafted by Knights & Lords Bespoke Tailors.

During the suit fitting of the great Mike Tyson, Bespoke tailors Ashish and Pawan believed they had done justice to his powerful personality and unique physique but did not know what to expect. They put the suit on Mike Tyson and hoped for the best and what followed was completely unexpected.

Bespoke Tailor Pawan of Knights and Lords almost got his ear bitten during the suit fitting of Mike Tyson! 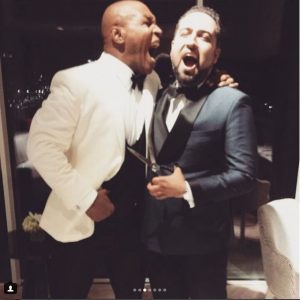 If that wasn’t enough of a surprise, Bespoke Tailor Ashish of Knights & Lords got a punch thrown at him from Mike Tyson himself!

Later Ashish and Pawan understood that this was Mike Tyson’s way of expressing his love and gratitude for the great work that had been done on his suit. He was ecstatic and thanked Ashish & Pawan of Knights and Lords with a warm hug. The legendary Mike Tyson is a true gentleman with a heart of gold, a quality and a side of him only a privileged few have been able to see. Ashish and Pawan have been lucky enough to be one of them. 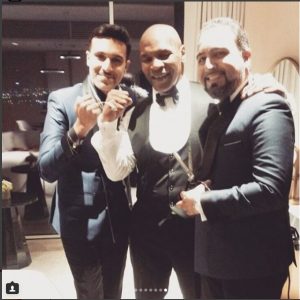 As expected, Mike Tyson carried the Tuxedo with great style at the Gala dinner of the launch of the Mike Tyson Academy as can be seen below.

And thus, Knights & Lords has had the privilege to add the legendary Mike Tyson in their list of clients and continue to get suit commissions from him till today.